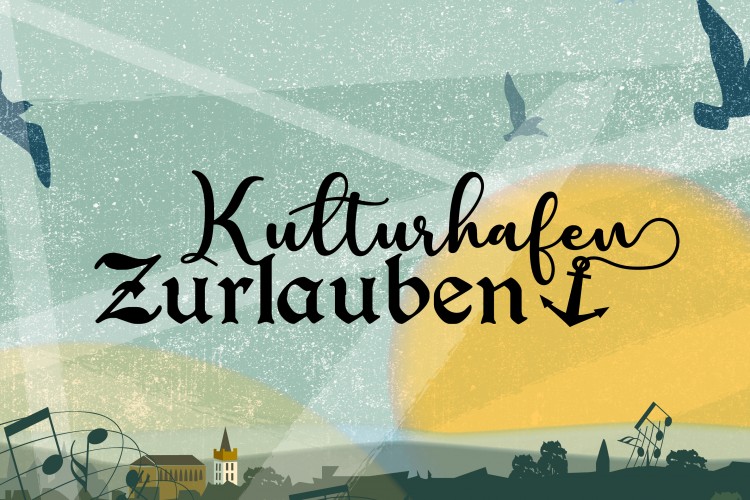 Trier was founded on the Moselle. The Roman bridge and the fishing village of Zurlauben still show important stages in our more than 2000-year history. The extensive staircase, which was completely renovated in 2018, is a popular meeting point for many people in Trier. In recent years, a festival has been realized with the Kulturhafen Zurlauben, which brings the city and the Moselle closer together.
Read more
The Kulturhafen Zurlauben is designed as a landing stage for Trier's culture. From August 26th to September 4th, 2022, various cultural initiatives and institutions will design the program and present samples of their offers in Zurlauben. A colorful program of music and theatre, poetry and culture is offered daily in front of the wide staircase.

Experience relaxed evenings with culture in the city on the river!

Friday, August 26 – Moselle Music Festival
6.30 p.m. Opening
7.00 p.m. Dock In Absolute (Progressive Jazz)
For the opening, the ships are coming from the border triangle: "Dock In Absolute" is a top-class trio from Luxembourg, Belgium and Germany, which combines progressive jazz, classical music and rock. This is how Jean-Philippe Koch on the piano, David Kintziger on the bass and Victor Kraus on the drums develop their unique, haunting style: from lyrically graceful to irrepressibly wild. With the generous support of the Fondation Marienburg.

Saturday, August 27– Clouds Collective (Electro)
2:00 p.m. Frau Müller
3:00 p.m. Rutt
4:00 p.m. Salvo
5:00  p.m. Andis
6:00 p.m. Matiso (live)
7:00 p.m. Rise Of Apollo
8:00 p.m. Cats&Breakkies
9:00 p.m. Dahne b2b float
A sailing boat with an electric motor: This is how you could collectively describe the program of the cloud. Because the productions of the individual artists and formations are all handmade, melodically carrying and, if necessary, close to the wind, but always electronically supported. Some guests will dock at the port for the Trier cast: the electronic live band Cats&Breakkies from Berlin and Matiso from Hamburg. Set sail!

Sunday, August 28 – 30 for Trier/ Day of the Trierer
11:00 a.m. Thomas Kiessling (tenor)
12:15 p.m. Jazz Club Session (Open Stage: bring an instrument and play along!)
2:00 p.m. No Cover & Band (acoustic music trio)
2:45 p.m. Jonas Oktober (singer/songwriter)
3:45 p.m. The Blue Drive (blues rock)
5:00 p.m. Unplugged Gang (songs from the 60s to today)
6:30 p.m. Astrid & Co (Blues-Rock)
8:00 p.m. Mambo Schinki (organ cover hits)
Anyone who has ever been there when Mambo Schinki mixes The Subways with Toten Hosen in a smooth home organ transition does not ask why he is allowed to play the glorious finale on the Trier Day. But even before that, some musical pearls are washed ashore: star tenor Thomas Kiessling, jazz with a hands-on factor on the open stage, German and English ballad pop with "No Cover", self-written singer/songwriter music by Jonas Oktober or blues rock from "The Blue Drive “. When then unplugged music by Wolli Prinz, Alois Kirchen and Erich Fahl is added and the bluesy bow wave of the sextet "Astrid & Co" makes its way, the Kulturhafen day is perfect.

Monday, August 29 – Trier Jazz Club
7:00 p.m. Triple Change (fusion rock)
8:45 p.m. Tinnef (pop jazz)
In August 2021, Triple Change emerged from the waters of the Trierer Musikmeer for the first time. For their fusion rock, the trio uses music greats such as Miles Davis, Stevie Wonder or Toto to create their own versions.

That's exactly what the Trier quintet Tinnef does with pop jazz covers, from the Beatles to Billie Eilish, from Metallica to Nat King Cole. After the emergence comes the immersion: Let yourself be inspired!

Tuesday, August 30 – DANCE in Trier
7:00 p.m. Dance fun for singles and couples: Merengue, Salsa and Bachata
8:00 p.m. show dance and dance animation
8:30 p.m. DJ Rodrigues: Latin American dance rhythms
It doesn't matter whether it's a gentle wave or a wild swell: you can ride any of them with a Latin American sense of rhythm. The Trier dance school "Dance in" also invites the absolute beginners among you to an evening after which you not only master the basic steps, but also put your first dance figures on the floor. Ready for a cruise south?

Wednesday, August 31 – Trier cultural area
7:00 p.m. Comedy Slam
On this evening, six comedians and comedians braved the sometimes stormy tide of the audience, which voted on victory and defeat with applause. Will another young star go on a great journey to success this evening? Who knows. It will definitely be entertaining.

Thursday, September 1st – Small folk theater: “Römerzoores on Äbbelbaamstie”
6:30 p.m. The Romans want to flatten the village of Treverer and build a whole new big imperial city somewhere on the Moselle. “Damn it,” the Treverer thought. The fight is resumed and even the ancestors suspect that they must help...
In the meantime, a real classic: Helmut Leiendecker's dialect piece "Römerzoores on Äbbelbaamstie". This year it will also accelerate in the Kulturhafen. It's not just the people of Trever who are thrilled!

2 p.m. – 5.30 p.m.: "Museum on tour" - handicraft stand for children from the Stadtmuseum Simeonstift

A day dedicated to hope for peace: the Ukrainian-born creative studio “Freie Vögel” presents a section of the rich Ukrainian culture in its program, the children’s and youth choir of the Trier Theater tunes in John Lennon’s “Imagine”, among other things, and juggler Christoph Engels leaves a homemade one dove of peace soar into the air.

Subject to change. All statements without guarantee.